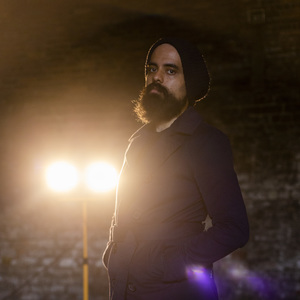 Kapil Seshasayee is a polymath, and a true original talent, both as a songwriter and as a soundsmith, a one man combination of Scott Walker, Mark Hollis, Arca and Richard Dawson, creating something wholly unique. Combining electronica flourishes evoking FKA Twigs with Indian Classical guitar ornamentations, stunning vocals and a ...

penchant for unorthodox instrumentation such as the aquaphone, Kapil manages to be truly experimental yet still accessible.

Building on the momentum of his acclaimed debut album A Sacred Bore -- featured in Pitchfork, VICE, BBC Introducing, The Guardian, The Quietus, and Rolling Stone India -- Scottish polymath Kapil Seshasayee makes an eclectic shift away from his experimental roots towards a psychedelic crossover of R&B and avant Indian classical evocative of Solange, Arca, and Ananda Shankar on his upcoming album, Laal.

While the serrated guitar architecture of Kapil’s first LP put forth a scathing critique of the lingering manifestations of the caste system that still permeate Indian communities in the guises of honour killings and Hindu nationalism, this second installment in his Desifuturist Trilogy of albums expands on those issues with a focus on the Bollywood film industry. “Every song from the album tells a story about what’s not immediately visible in Bollywood,” says Kapil. “I want those stories to illuminate things that people aren't thinking about and empower those who live these stories.”

The album’s first track “The Gharial” (set for release Friday, May 22, 2020) is a scathing critique of Bollywood profiteering off of nationalism at a time of great political unrest in India through the release of anachronistic period films. Releasing films which present truncated depictions of triumph in eras such as the Mughal empire serve only to escalate tensions between different factions of an audience divided by issues such as the Citizenship Amendment Act & COVID-19 epidemic in the present day. The song is named for a type of crocodile considered sacred in traditional Hindu mythology - it's no coincidence that recent hit film Tanjhaji featured a cartoonishly "evil" antagonist roasting and eating a crocodile onscreen. Such films seek not to educate or entertain, but to weaponise conflict.

“The Pink Mirror” (set for release Friday, June 5, 2020) is a sonic essay on censorship and dissonance within LGBT representation in Bollywood cinema. While antiquated portrayals of LGBT caricatures continue to serve as little more than comedic relief in mainstream Indian cinema, attempts by LGBT film makers to tell their own stories are often blocked from release (the song is named after a Hindi film by queer film maker Sridhar Rangayan, which was banned by the Indian Censor Board). "The Pink Mirror" highlights the prevalence of problematic narratives in modern Bollywood films, which includes transphobic portrayals of trans characters as villains trying to deceive other characters through seduction. Proceeds from "The Pink Mirror" will be donated to Solaris Pictures, which champions the production and distribution of Indian queer cinema.

Bollywood can feed into misogyny as well. The track “The Item Girl” centers on a dehumanizing trope of a very specific Bollywood typecast. If you watch many Bollywood movies, you’ll start to notice that every film features a lively song and dance number sung by a peripheral character typically known as an item girl -  a very sexualized young woman in a non-speaking role, merely existing as a public spectacle whose sole purpose is arousal. In stark contrast - the archetypal Bollywood heroine is usually portrayed as virginal and subservient. Kapil insists if a young man grows up with these depictions of women in movies in a diasporic brown household, it influences the way he treats and thinks about women. The notion of an independent or opinionated woman being irrelevant to the plot of a film sends a powerful, problematic message.

“For a long time, I found the persistence of archaic sexism and misogyny among other brown men in the diaspora really strange at a time where everything else is developing,” reflects Kapil, “but then you realise it’s embedded into the very pop culture they grew up with. A popular medium normalising troubling behaviours is nothing new however - it takes little more than a tweet from someone powerful now to elicit a riot.”

Seshasayee’s remark reminds us that Bollywood’s troubling tropes are not wholly unique to India’s film industry, but are often local manifestations of global tropes, social ills normalized by powerful interests who have much to gain by sowing discord. The entertainment industry is, at once, the culprit and the platform most primed for positive change. Therefore, Kapil is aiming for a more nuanced approach.

The musical influences driving Kapil’s work are disparate enough to elicit intrigue, but can all be heard throughout A Sacred Bore: Richard Dawson, Scott Walker, Glenn Branca, Satyajit Ray & Einsturzende Neubauten. For Laal, Kapil draws on a refreshingly diverse set of influences - from the socially conscious R&B of D’Angelo to the Indian classical ornamentations of saxophonist Kadri Gopalnath, from the abstract yet holistic cadences of Amirtha Kidambi to the inspiring production chops of Kindness and Blood Orange.

While Seshasayee’s labyrinthine guitar leads still pay homage to the harmonic and rhythmic influence of Carnatic music, here it emotes the cerebral avant-jazz of Mary Halvorson and is refined via digital processing reminiscent of St. Vincent. The new hazy R&B sound delves into an entirely new palette of sounds, from the Prophet 5 synth plugins prominent on “The Item Girl” to the further-afield explorations in granular synthesis inspired by Arca, Sophie, and the sonic textures of Holly Herndon.

Having shared festival bills at SXSW, Latitude Festival, Celtic Connections, Cardiff Psych Festival & SOLAS Festival with the likes of Gaelynn Lea, Ben Folds, Raghu Dixit & Damo Suzuki - Kapil has developed a reputation as an engrossing and engaging live performer, producing his stunning arrangements alone with a variety of instruments and tools at his disposal.